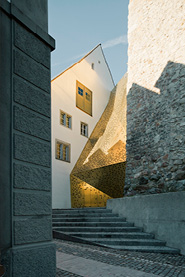 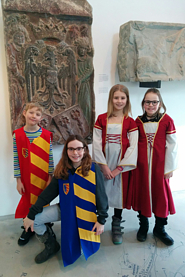 In 1943, a museum of local history was established under the leadership of the Rapperswil tourism office on the first and second floor of the Breny House. The opening was preceded by a large-scale collecting effort that brought together a myriad of historical objects. In 1958, the building’s last owner, Heinrika Breny, bequeathed the property including the tower and connecting building to the local community in her will with the requirement that the building continue to be used for cultural purposes. In 1960/61, the entire complex was rebuilt and the museum was extended to all three parts of the building with an exhibition on the town’s history.

In the early 21st century, structural deficiencies, safety concerns and the outdated exhibition concept prompted the local community and the political municipality to jointly pursue the redevelopment and reorientation of the local history museum. Extensive preparatory work and an architectural competition culminated in the 2010/12 construction of the new connecting wing as well as rooms for temporary exhibitions and sanitary facilities. In addition, the permanent exhibition on local history was completely redesigned to address the city as a whole, which had grown to encompass both Jona and Rapperswil. In March 2012, the renovated and expanded Stadtmuseum Rapperswil-Jona opened to the public.

The Stadtmuseum has a collection of around 3,000 historical objects of cultural and economic significance dating from the late Middle Ages to the present. The collection is held in three repositories and continually expanded with new acquisitions and donations.